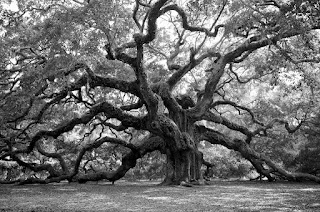 Haven't done much writing recently. I am blaming a broken brain and general life stress. Slowly getting back into the swing of things. I finished a scene in Strife's story. I've done a few edits and rewrites in Lucas's story but I still have a long way to go with that one. And because of a lucid dream I am working on a short story for Lucas set more than a year before book one. I will post it here when I'm done with it.

Meanwhile, I wrote this in response to a writing prompt back in April that used a different picture of the Angel Oak in South Carolina. I’ve been eyeing the Angel Oak as the visual for the Nexus in Strife’s story for a while. This may or may not be how it eventually goes down, but this is one version of how Strife learns about his Destiny.

"It's a tree." Strife was tired of this shit and had better things to do than listen to some crazy bitch. He regretted leaving his smokes back on the porch, he needed something to do with his hands so he tucked his thumbs in his jeans pockets as he waited for the old woman to continue.

Mama Kee let out a long suffering sigh as she mumbled something about stubborn ass men. "This here ain't been just a tree for years boy. Now gimme your hand."

His brow arched at the request, though in the few weeks he'd known the crazy old woman she had done nothing to earn his distrust. With an annoyed huff he stretched out his left arm, his palm up. "How can a tree be more than just a tree?"

"Your stubborn ass won't trust nothing you can't see for yourself. So I'm gonna show you." When she gripped his hand he could feel the rough callouses earned by someone who had worked all their life. As she looked at his palm he almost asked if she was going to tell his fortune, but then quick as a flash she pulled a short blade from her belt and sliced across the heel of his hand to leave a deep cut that bled immediately. The wound wouldn't last though, even as the beast howled within his chest at the violation, he could feel the wound start to stitch itself closed. It wasn't like her blade was silver after all.

"Mother of Fuck! What'd you cut me for?" He yelled as he tried to yank his arm back only to find her grip like iron and she wasn't about to let go. Instead she yanked him forward like he was a child to her until she could press his bloody palm against the rough bark.

"Hush boy. Stop your hollering and pay attention. Open your eyes to see what is real." Her hand kept his in place no matter how much he pulled. It shouldn't have been possible, she barely reached his chest standing up and was old to boot. He could have picked her up and broken her across his knee, or so he had thought before that moment.

"My fucking eyes are open and you need to let me the fuck...." His words trailed off as he felt heat beneath his palm. The bark was still rough and grey yet as he watched, light began to seep out from between the edges. The light traveled up into the branches and down into the roots. The moss seemed to sparkle as if permanently laden with dew and the leaves grew translucent and golden.

"Now your eyes are open boy." She released his hand so he could pull it back, but the glow did not stop. The glow spread out from the tree like veins beneath the soil. Hundreds of veins, some thick as the trunk itself, others thin as spider silk and they all joined together within the tree. "This here is what you call a Nexus point. Where ley lines come together... This here Nexus was formed over hundreds of years, from the time of the red man who first walked these lands, to when the white man came to conquer the land and was strengthened and hardened by the blood of the black man enslaved to work the land."

Strife had never seen anything so beautiful, nor anything that felt so powerful. It was like he could hear and feel the heartbeat of the land. "Why you showing me this?"

Mama Kee laughed, "Ain't you been listening to a thing I said boy? You're the Guardian of this land, of this Nexus. Within you runs the blood of the white man who conquered the land, the black man enslaved to the land, and the beast within you is from the blood of the red man who first learned of this place and knew it needed protecting. You were born for this boy. This here is your destiny."

Strife only had one response to that. "Fuck me."
Posted by Kaiden Moss at 8:09 PM No comments: Links to this post