To Hunt A Rogue. Chapter 1 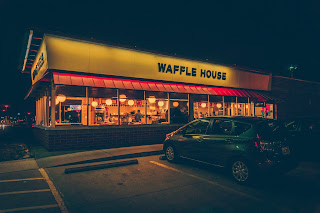 The billboard just said motel with faded numbers that declared the price just beneath it. Only 35 for a night, any room, no discounts. They offered free HBO, though if the TV worked it was a miracle. By the time folks pulled off the highway looking for a place to rest their head they didn’t care as it was at least twenty miles to another exit. The parking lot full of out of state tags, RV’s, and a handful of big rigs. There were more trucks parked behind the 24-hour gas station across the street. Only other establishment at the exit was a Waffle House and it did brisk business at all hours of the day or night.

The booths were full of tired families and even more exhausted truck drivers. The waitresses moved swiftly from table to table to ensure all drinks were full and orders taken. Even the stools at the counter were all occupied though those who sat there looked askance at the end of the counter where the occupant of the last stool looked over a menu as he flipped a battered zippo between his fingers. Words had been etched into the metal long ago, but years of use had worn most of them indecipherable. Only the name emblazoned on the lid was still easily read, Strife.

The waitress assigned the counter took the cash from a customer and wished them a good night. After she tucked her tip into her apron pocket she fished out her order pad and made her way back to the end of the counter. The tall man had ordered a coffee when he first sat down to peruse the menu. A pile of empty creamer container was piled up next to an equally large pile of empty sugar packets, his mug half empty. “You ready honey? This for here or to go?”

“Yeah, ta go.” The man’s voice was a deep rumble with an accent so thick molasses should have dripped off his words. When he looked up from the menu there was something unnatural about his eyes. The waitress hadn’t known that eyes came in that shade of yellow gold. “Two hashbrowns, one large smothered, covered, diced, and capped. Then a triple smothered and chunked. Steak, T-Bone, rare. Three eggs scrambled with cheese. Bacon, n’extra bacon. Two waffles, gimme a lotta them syrup packet things. ‘Nother order of eggs, sunny side up. Two grits with cheese, extra butter. And… ‘nother coffee ta go an’ some OJ.” He set the menu down with a smile that was more of a smirk.

Her pen worked across the page as she wrote down enough food for a table of four. “Sure thing honey. Want a refill while you wait?”

“Yeah, an’ some toast with grape jelly.”

“Coming right up.” Something about the way he looked at her, the way he smiled, made her face heat. She was a married woman with kids half grown and here she was blushing like she had at 16 when an older man smiled at her. She topped off his coffee and left more creamer and sugar within his reach as she put in his order. She made the toast herself and placed it in front of him before she went to check that everyone else in her area was doing okay.

A couple of kids stood at the jukebox before they ran squealing back to their table. Over the diner’s speakers some bubble gum pop song girl was chirping about kissing a girl and liking it. The man at the counter mumbled about crap ass music as he spread butter on his toast followed by the grape jelly he’d been given. As he ate his toast he watched the cook work the grill while others in the diner watched him.

He had the tan of a man who worked outdoors most of his life and was tall with a long-limbed build. The faded black t-shirt he wore did little to hide his muscular physique, or the sleeve of tattoos on his left arm. His hair was long, wild, and just barely contained by the pony tail he’d pulled it back into. He wore jeans that had seen better days with one knee ripped out. The combat boots he wore looked as if they had seen their own share of battles. A black leather jacket hung on the back of his chair. Obviously well cared for as the leather was clean and oiled.

By the time his order was ready he’d finished his toast and coffee and stood by the juke box. He pushed a quarter into the slot and made his own selection. As the waitress called that his order was ready Trent Reznor’s voice was heard over the speakers. While his order was being totaled he pulled his jacket on and tucked the battered zippo into a front jean pocket. From the other he pulled a roll of bills and handed the waitress enough to cover his meal and leave her with a nice tip. “Thanks darlin’.”

“Any time honey.” Her cheeks heated again as she completed the order and stuck the receipt with the others next to the register. She watched him leave with his bags of food and thought that her husband was gonna get lucky when she got off shift. Too bad his ass didn’t look so good in a pair of jeans anymore. With a bit of a sigh she turned away from the register as someone called out to get her attention. It was going to be a long night.
Posted by Kaiden Moss at 9:54 PM