Werewolves On The Nile Ch.4 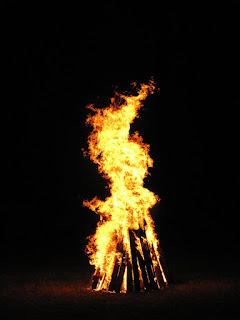 Once inside he turned the lamp down to a soft glow as he waited for Strife to leave and join him. Cain didn’t pace or fidget. He was too old for that. He sat with his elbows braced on his knees, his fingertips pressed together as he looked at a spot on the rug as if he could see through it. When Strife finally joined he straightened but waited for the other man to speak first.

Strife went to his cot as he grabbed his duffel from beneath it then dug out his pot. As he rolled a joint he finally spoke. “C4.”

“Nuff ta put a hurtin’ on someone or something. They got it hidden under buncha science stuff. Like fer diggin’ up fossils n’shit.” He tucked the joint between his lips before he pulled out a battered zippo and lit the end. After he took a drag he continued, “Their shit is on two of tha baggage camels.” He said as he expelled the smoke and offered the joint to Cain.

Cain accepted it and took his hit, though not as deep of one as Strife, “Said their Daddy was an archeologist, they are on some journey in his memory. I could smell the lie across the fire.” He handed it back then leaned back on his cot.

“So what ya think? Arms dealin’? Or just mules?” Strife smoked enough pot to put most people on their ass. It kept him level and his temper under control.

“Not sure. Whatever the fuck they are up to, they’re nervous as long tailed cats in a room full of rocking chairs. They sure as hell didn’t like me shining a spotlight on them tonight. Don’t think they know we’re onto them in any way though.” He turned and flopped back on the cot to stare at the tent roof. “One of these years we’ll have an actual vacation. No bullshit.”

“No bullshit.” Strife said with a chuckle. He pulled off his boots then shirt as he finished off the joint. When he finally tossed the roach, he looked over at Cain, “Come ‘ere.”

Cain looked over at him, the words on his lips died there. He knew that look in Strife’s eyes and it was enough to make his own cock twitch. Cain rolled to his feet as he crossed the short distance between their cots to stand before the seated man. Strife just smirked up at him, “That’s my good bitch. Now strip.”

As Strife leaned back one hand dropped to squeeze his cock through his jeans as he watched Cain. The urge to punch him in his smug face did battle with the surge of raw need that was like a kick to the gut. He’d taken his boots off when he got to the tent so now he had to just pull his layers off. He wore a denim colored shirt over a sleeveless t-shirt. He unbuttoned it and tossed to the floor before he stripped out of the t-shirt. The sensation of the night air against his scars made him want to pull it back on, but that wasn’t what Strife asked him to do.

He could feel Strife’s eyes on him. He felt devoured by the man’s gaze. It made his mouth dry. Cain wasn’t artful about stripping. It was just the first step in whatever game Strife wanted to play that night. By the time he kicked his jeans and boxers to the side he was erect, his face hot, and his own eyes locked with Strife’s.

“Damn yer sexy as hell… ‘specially when ya look at me like ya wanna throw down as much as ya want me ta fuck ya.” Strife leaned forward as he grabbed Cain’s hips to pull him a couple of steps closer until the man stood between his knees. He leaned in as he pressed his nose against Cain’s stomach, just above his naval. Strife hummed softly as he just rubbed his face against Cain’s skin. “…smell good too…”

“Yer even sexier when yer mad as hell.” He kissed Cain’s stomach then leaned back again as he opened his pants to pull out his cock, “On yer knees… Oh… and hands on me or behind yer back. No touchin’ yer dick.”

Cain’s fingers curled into fists. Every single button. Strife pushed them all at once. For a handful of heart beats, he stood there and glared. One punch. Maybe knock a few teeth out. Bloody those smirking lips. Make those eyes that saw him too clearly swollen and purple. Instead he dropped to his knees, his gaze never wavered as he met Strife’s eyes directly. He moved closer as his hands moved from Strife’s knees, up his thighs, then he wrapped his hands around that heated cock. As Strife smirked, Cain leaned down to wrap his lips around the swollen head.

That taste hit his tongue. Strife’s scent filled his nose. He could call Strife a son of a bitch and a bastard all day long. But when it came down to brass tacks he couldn’t get enough of the jerk. When Strife’s hand moved to rest on the back of his head Cain growled so the sound vibrated through the other’s shaft. A low groan escaped Strife as he let his head fall back even as his hand began to exert pressure to push Cain down.

Cain had his hands wrapped firmly around that thick warm length. Each vein pulsed hot against his palms. Their bodies ran hot, almost feverishly so. The blood of the beast a powerful force that drove them, pushed them, compelled them. It led them into battle after battle and out again on the other side. It fueled the raw lust and need they had for one another. Always would they choose another wolf over an ordinary mortal. Someone who could take as much as they could give. Someone who would never shy away from a bit of bloodshed in their love making.

When he lifted his eyes, Cain watched the length of Strife’s exposed throat. The man’s Adam’s apple bobbed each time he swallowed. His tongue visible for the few seconds it took him to swipe it across his lips. When one of Cain’s canines scraped across sensitive flesh he listened as Strife gasped before it just seemed to melt into a groan. They had their games. Strife usually took the lead in bed while he was fine letting Cain lead elsewhere. In that moment as he watched Strife’s face transform as the pleasure built… he felt powerful. A power equal but different to what he felt even during the full of the moon. Strife was his. And he was Strife’s.

Cain lost himself in the act of sucking his lover’s cock. Anything beyond those tent walls may as well not exist. Not the camels, not the tourists, especially not those Libyans and whatever the hell they were up to. The world consisted just of himself and Strife. The taste of Strife’s skin. The smell of his sweat. The heat of his flesh as it passed through Cain’s lips. The urge to drop a hand to his own cock and stroke it in time with his attention to Strife grew by the moment. He wanted to climb into his lover’s lap, sit himself right down on the cock which pulsed in his mouth.

He had always had an egalitarian attitude with his lovers in the past. No set roles to play. Just do whatever felt best at the time. But with Strife it was so different. Strife controlled and consumed. He teased and tormented. He riled Cain up until the man felt ready to burst. Yet at the end of their games, both left well satisfied. Cain knew in the back of his head that Strife would fuck him again. Would suck his cock until he came in the man’s heated mouth. They would have days, even weeks of their normal activities before Strife riled him up again. It only made Cain want him more.

Cain could sense that Strife was growing closer. The sounds he made. The way his toes curled against the woven rug in their tent. The soft growls which escaped him when Cain’s cheeks caved in as he pulled back. Then the words which were a jolt to Cain’s loins, “Hands behind yer back.”

Strife’s command was breathless, barely above a whisper. But he expected immediate obedience and received it as Cain released his lover’s shaft and neatly folded his hands at the small of his back. Strife shifted on the cot without pulling his length free of Cain’s mouth. He stood but hunched over as his fingers tangled in Cain’s thick curls. Held his lover’s head in place as he began to fuck Cain’s mouth, his length forced into Cain’s throat. It wasn’t long before Cain felt his face heat from the strain and lack of air. Tears rolled down his cheeks as he drew in quick breaths when Strife’s hips retreated before they pushed forward violently. He didn’t completely bury himself in Cain’s throat, but enough of his length went down that it was noticeable from the outside.

He wanted to beg. He wanted Strife to hurry. He wanted Strife to push him over and fuck him until they both came, hot, sweaty, and sticky. Strife’s game continued. Both hands dropped to Cain’s head. His nails raked across his lover’s scalp as he fucked his mouth without obvious regard. Cain felt so light headed he distantly wondered if he would pass out before Strife finished. Then with a snarl Strife tensed up. His cum spilled down Cain’s throat, on his tongue, and as Strife withdrew, one hand stroking his length, he spilled the rest on his lover’s lips, chin, and chest.

Strife’s eyes seemed to glow in the dim lantern light as he looked down at Cain. His thumb brushed over Cain’s lips to smear the pearly white up the man’s cheek. “Damn yer a mess…” His voice a soft purr. “Leave it on ya tanite. Ya can wash yer face n’neck in tha mornin’… but leave tha rest.”

He wanted to be angry. He wanted to be pissed. He should punch the fucking red neck in the dick. Yet that wasn’t what escaped his lips as he looked up, “…Strife…” His mind cloudy, his eyes unfocused. Cain wanted nothing more than to bury himself in Strife’s scent.

The smile that touched Strife’s lips, for once, wasn’t a smirk. It wasn’t mocking. It was fond, almost compassionate. He knelt as he cupped Cain’s face in his large rough hands. Strife leaned in and kissed Cain’s brow. Both eyes as they closed for the affection. The tip of his nose. Then his lips. It was still Strife’s demanding, controlling, consuming kiss. But there was so much more beneath it. So much emotion that neither could express in words. Emotion that neither had ever felt for any other living being before they’d found one another.

Strife pulled Cain onto his cot with him. Let his lover use him as a pillow as his arms wrapped protectively around a man who didn’t need the protection but loved the gesture nonetheless. No words spoken between them, none needed. The world could burn to ash while they had one another. Cain still felt that raw ache deep in his loins. That need to fuck his lover. For the moment, he was content right where he was.