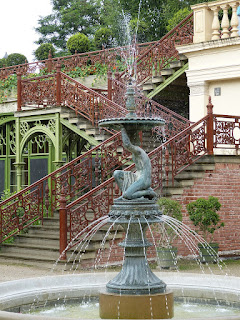 It was a beautiful early spring afternoon. The sun was bright and warm with nary a cloud to mar the sky. A gentle breeze blew in from the Dragon’s Tears river which kept the temperature in the gardens comfortable enough for the denizens of the House to enjoy a little time outside in the sun. Lucas had already been up for hours. He’d met with his dance instructor that morning as he and one of the girls practiced for a performance they would give in a few weeks. The choreography was a sensuous delight and was sure to heat the blood of all who watched. The House would auction off a night with Lucas and his partner after the performance. It was guaranteed to bring in piles of gold dragons.

After a morning spent hard at work under the stern discipline of his dance instructor it was a relief to be able to just lay out under the warm spring sun. His robe was draped over the back of a nearby chair as he stretched out nude on a blanket upon the neatly manicured grass. The only thing that marred his afternoon were the sounds of grunts and groans from behind the nearby bushes. Lucas understood what he was and that when he was in the House he was always expected to perform. He simply wished their frequent Voyeur had chosen another day to visit, or had chosen to watch some girls bathe. But no… he had decided to pay to watch Lucas lay out in the sun as he self-abused.

Lucas wanted to yell and tell the man to at least be quiet about it, his behavior threatened to ruin an otherwise peaceful afternoon. But he knew that if he addressed the man directly it only ruined the experience for him and he wouldn’t leave those nice tips he always did when he finished. Though it would be nice if the coins weren’t sticky when he left them behind.

With a sigh Lucas rolled over onto his stomach and gave his hips a little wiggle.  Maybe he could at least give the horny bastard a more active show so he’d finish faster and move on. Lucas hummed the music he and his dance partner would perform to as he wiggled and lifted his hips. It looked like he humped the blanket. After only a few minutes he heard a stuttered groan from the bushes, “Gold’s balls...”  The young courtesan muttered to himself as he went still. When he heard his Voyeur finally walk away he rolled onto his back once more to enjoy the rest of his time in the sun.

Unfortunately, it seemed to be the day for unwanted persons to interrupt his relaxation. A shadow fell across his face and he sighed, “You are blocking the sun.”

“I have a message for you.” The Procurer’s voice snarled above him.

Lucas opened his eyes as he shaded them with a hand, “Shouldn’t you be bursting into flames or something?  What with the sunlight and you being undead and all.”

The man sneered at Lucas’s tasteless joke. “The Mistress has a special assignment for you. You are to go at once without delay.”

With a loud annoyed sigh he sat up, “And what assignment is this that is so important?”

The Procurer held out a sealed envelope to the youth, “The Mistress said it requires your special… talents.”

Lucas looked at the parchment and the inky black seal that held it closed.  He found his mouth suddenly dry as he gazed upon that seal. When he accepted it from the Procurer he could feel the slight tingle of magic in the parchment. Quite possibly if anyone other than him attempted to open this they would die a rather gruesome death as his Mistress held her secrets close. He cracked the seal before he unfolded the note to read its contents. It was as if the words sprang to life on the parchment as he read and were burned into his mind, only to vanish from the page just as swiftly.  When he had read the whole thing, the parchment burst into flames, it turned to ash before he’d even had the chance to yelp in surprise. “Bloody Red’s teeth...”  He whispered, as he wiped his hands on the blanket he sat on.

The Procurer smirked as he enjoyed anything that set the annoying blonde back on his heels. “Do you understand the assignment you have been given?”

“Of course I do.” He said as he rolled gracefully to his feet and grabbed his robe to pull on, “You wouldn’t happen to know why the sudden interest in the military would you?”

“I do not question the Mistress. I only obey. You would be wise to do the same.” The ghoulish man snapped in annoyance.

That was a step too far for the Procurer as it dug under the boy’s skin to irritate him. With a sudden snarl of anger Lucas whirled on the Procurer as the gaunt pale man was snatched off his feet to hover in the air, his arms pinned to his side, his legs trapped together, his mouth held firmly closed by the strength of the blonde youth’s mind. The boy tugged his robe closed, tied the silk sash then stood before the man he held captive. The sudden anger was replaced with a calm demeanor as he smiled up at the Procurer. His whisper soft voice was for the Procurer’s ears alone as it dripped with sweetness that was not mirrored in those sapphire blue eyes.

“I have obeyed the Mistress with all my heart and soul since I first knelt at her feet four years ago. I have done everything she has ever asked of me. I have fucked who she said fuck. I have raped the minds of those who shared my bed to steal information that she can use to increase her wealth, power, and influence. I have even killed in her name. Do not question my loyalty you miserable pathetic ghastly worm. Jealousy does not suit someone who the Mistress still holds in high regard.”

He set the Procurer gently on his feet and even was so nice as to straighten the man’s lapels. “But let me warn you now, if you continue to treat me with this insolence and attitude I will be forced to reach into your mind and tear out everything that makes you... you... leaving nothing more than a babbling drooling idiot.”  He looked up at the miserable man’s face with a deadly sweet smile, “Are we understood?”

When the boy released the Procurer’s jaw from his telekinetic grip the old man hissed, “I understand you perfectly.” Rage flashed in his eyes but he kept it from his tone. One did not work for their Mistress for as long as he had to scare easily.

“Excellent.” Lucas chirped as he kissed the Procurer on both cheeks just to further annoy him. “I shall go and prepare now. I take it my schedule has been cleared for the next few days?”

As soon as Lucas released him the Procurer stepped back to tug on his jacket to straighten it after he was manhandled by the boy. “The Mistress trusts that you can accomplish this task swiftly. She gives you three days.”

Without another word to the sour old man he turned on his heel to head inside to his room. There were many ways to seduce a soldier, but he didn’t want just any old soldier.  Nor did he want one with too questionable of morals.  He needed a soldier who fought the good fight because he believed in doing the right thing. But he needed one who knew what darkness was and fought against the darkness in his own soul. Sure... it would be easy, a regular walk in the park.  Or it would be impossible and he would be faced with the fact that he had failed her. He did not think he would survive such an encounter, favorite or not, he did not know of anyone who had.